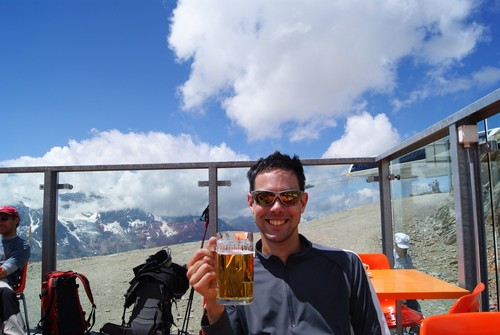 Hi, and welcome to my web site. First of all thanks for visiting. The aim of this page is to tell you a little bit about me and my background. It may also give some idea of what has motivated the development of the site on walking in the mountains of Snowdonia.

I am a 33 year old and graduated with an M-ENG in Computer Systems Engineering at the University Of Wales, Bangor in 2000. I have decided to stay in Bangor, and run my own business offering web application design and Linux solutions. My business is called Snowdonia IT Services and the business website can be found athttp://www.snowdoniait.com

Before coming to Bangor I went to Bishop Vesey's Grammar School. The school used to own a house in Betws-y-Coed, and our chemistry teacher (Mr. Andrew Jones) ran fell walking trips to the house each autumn half term and Easter. I used to go on these, and it added to the introduction to Snowdonia which I had been given by my parents. We had always gone to Criccieth for our Summer holidays from when I was 3 years old. We spent some time on the beach and some in the mountains.

Going walking with the school included some longer walks than I had done before, going over the Glyderau and Carneddau. The weather was varied as would be expected, but I enjoyed the days out, and decided that I wanted to carry on with walking when I went to University. This heavily influenced my choice, and I ended up by choosing Bangor.

I went abroad several times with my parents, visiting the Swiss and Austrian alps. I always enjoyed these holidays, and liked the higher mountains, however there is something about the British hills which makes them special, and I have spent time during summer holidays walking in Brecon and Scotland.

Previously whilst in Bangor I have been lived in Neuadd Rathbone, one of the halls of residence. During the first year I took on the position of Male representative on the hall committee, and followed this up by becoming chairman, a position which I held for 2 years. I was a hall tutor there last year.

I was a member of the mountain walking club at University for three years. During the first year I went out with them most weekends, and took my mountain leader (Summer) training with the club during the Easter holiday. I did more solo walking over the following two years, exploring the main ranges covered in the Snowdonia section of this site. I took and passed my mountain leader (Summer) assessment in September 1999.

A number of years ago I went on an Introduction to Climbing course at Plas y Brenin, and following this I have been climbing in the Peak District, the Ogwen Valley, and on Holyhead Mountain. I am a member of Clwyd Mountaineering Club, and am also a member of the Ogwen Valley Mountain Rescue Organisation.

Al and myself went to the Alps for the two weeks in 2002, staying in Chamonix, and visited Zermatt in 2003. I have also completed the Mountaineers Haute Route from Chamonix to Zermatt, a route I have been after for a number of years. Since then I have been back to Chamonix and Saas Fee with friends, and have completed a number of 4000m peaks on these trips.

I hope that you find the information provided here to be a useful addition to other walking sites currently on the internet.

Finally a special thanks to Andrew Jones previously of Bishop Vesey's Grammar School without whom I would not have developed such an interest in walking.